The local West Suffolk & Borders branch of the Campaign for Real Ale (CAMRA) has rewarded local licensees, publicans and brewers this week with a special ‘Lock Down Champions’ award.

The awards are in recognition of those thirty-six pubs and brewers in West Suffolk who have continued to serve their local communities during the past four months of lock down by opening their businesses to deliver a host of new initiatives … beer off sales, takeaway meals, pop up shops and extra services for struggling communities, all of which have really proved that ‘The Pub is the Hub’ in many town and rural communities.

A small handful of publicans and brewers have also been recognised with an ‘Above and Beyond’ award in recognition of their extra efforts to support their communities. Ranging from local brewers Nethergate and Brewshed, who have provided essential services direct from the brewery door, to local pubs who have provided take away meal services, home delivery to the elderly and vulnerable and community shops. Amongst the latter are the Gardners Arms, Tostock and Stanningfield, Red House.

Martin Bate, CAMRA branch Vice Chairman said “ Our members felt it important that we recognise the efforts of so many local licensees who during the lock down, and whilst suffering an unprecedented loss of business and their own financial hardship, have gone beyond the normal call of duty to support their communities”

David Marjoram of Gustopronto Limited, owners of Ingham’s Brewshed, who personally served more than 25,000 pints of takeaway real ale from his pop up outlet at the brewery whilst his five pubs were closed by the lock down, said “Receiving this award at such a difficult time for our industry is kind, thoughtful and much appreciated. It is good to know that our efforts have been valued by so many and that CAMRA and its membership recognise this”

Martin Bate continued “Pubs are now re-opening but it will be several months before normality returns. The limits on numbers, social distancing and less trade will add further pressures, particularly for those in rural villages. We urge everyone to support their ‘local’ as a customer. Sadly, because of the pandemic, we have already seen pubs in this area close permanently. This really is the time of ‘Use it or lose it’. 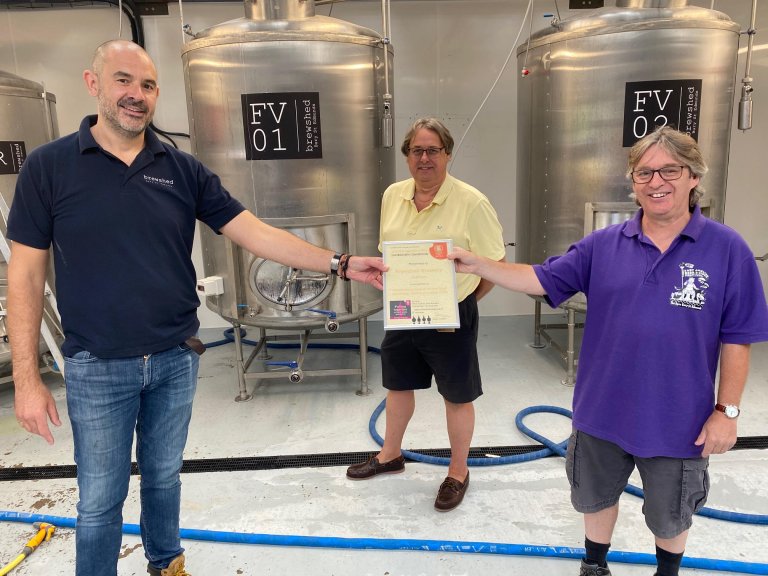 Above - David Marjoram of Brewshed receives his Above and beyond Lockdown Champion award certificate from CAMRA branch officers Paul Cooper and Martin Bate.