Pub of the Month February 2019

Report just in from our branch pub Maestro Andrew 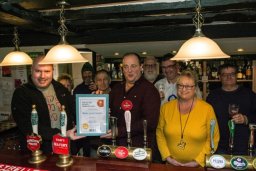 Our February Pub of the Month was the The Rose & Crown at Hundon. An interesting pub this: lots of space outside including a very pleasant paved area and a field by the church with seating and a stage. Plenty of potential and licensees Helen and Iain would appear to be realising it. Inside, both bars are cosy and welcoming. The food offering, basic pub fare, is good value – most meals are £6.95, including an excellent steak and kidney pie doing a reasonable impersonation of a Baleen whale! On the bar we chose from London Pride, Doom Bar, Landlord and Sharp's Sea Fury (5% and formerly Sharp's Special I'm told). The latter proved a favourite and was arguably beer of the day. To be honest, I could have happily spent the afternoon here but duty called......
On to Hundon's second hostelry, The Plough. This is a more food orientated pub on the edge of the village but it's worth noting that it does stage an annual beer festival. Nelson's Revenge and Nethergate newcomer Venture (3.7%) were available.
Our next stop was Clare where we got to visit four different but centrally located establishments. First up was The Globe which I would say is the more “pubby” with West Coast Wherry, Young's Bitter and Colchester Trinovantes Gold (4.3%). Friendly locals, most watching the rugby, and a very leanable bar.
Almost next door is The Cock. Now here's a busy pub serving St Austin's Tribute, Ghost Ship (first appearance of the day, makes a change!), Dark Star Hophead, Nethergate's Venture plus Rosie's Pig and two other ciders I neglected to record. Children, diners, rugby fans and drinkers, something for everyone here as long as you don't have a cockerel phobia – interesting wallpaper. Down the road from The Cock we found The Swan. A rather nice beer selection of Landlord, Ghost Ship and (hurrah!) Bank's Mild. What was, I believe, a lounge bar is now a restaurant but it's separated off from the drinkers' compound in such a way as to preserve a pub atmosphere. If you're “refurbishing” a pub, please take note.. Over the road is The Bell Hotel which does pretty much what it says on the tin. GK IPA and a nice pint of Abbot. That was it for Clare and I think it's safe to say that, pub wise, most people will find something that suits them. It's an interesting village in its own right and a good place to while away an afternoon.
Our penultimate stop was The Lion at Stoke By Clare. Now, this is a real boozer. GK IPA, Adnam's Southwold and more Sharp's Sea Fury. Personally, I've never been a great fan of Sharp's beer but Sea Fury is a good old fashioned brown bitter with a punch. Was it as good as the pint at The Rose & Crown? The jury is still out on that, but cracking pints in cracking pubs.
Finally we popped into The Six Bells at Horringer. Not long reopened, The Bells serves Brewshed beers (Pale, Best and American Blond at 3.9, 4.3 and 5.5% respectively) and appeared to be in rude health, although it would be nice to see some bar stools.
An interesting trip and a good range of pubs. Thanks to our driver Martin who (yet again) had to sit drinking orange juice while watching us enjoy ourselves