The West Suffolk & Borders branch of the Campaign for Real Ale (CAMRA) has recently rewarded local licensees, Barry and Jane Waterman of The White Horse, Beyton near Bury St Edmunds, with a lifetime achievement certificate for their record of long service as local publicans. 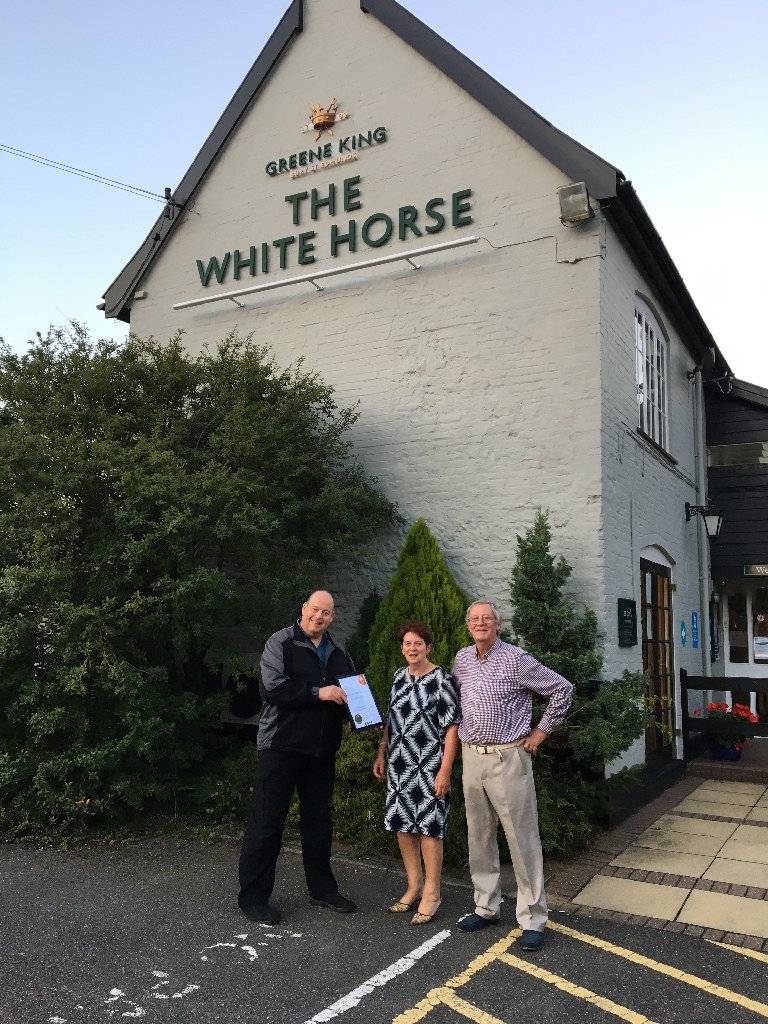 Licensees Barry and Jane Waterman being presented with their award by West Suffolk and Borders CAMRA Branch Chairman Chris Bailey (Left) outside the Beyton White Horse.

As we climb out of Lockdown Barry and Jane have clocked up a mammoth forty-four years as publicans for local brewer, Greene King, a career which began in Cambridge in 1976. The past thirty-five years of these have been spent at The White Horse, a cosy comfortably furnished village centre pub offering meals and accommodation, and which is renowned for the quality of its locally brewed Abbot Ale. One of the pubs most unusual features is its Well plunging sixty feet, from the bar to an underground stream, and alleged to be the water source for an onsite brewery in the 17 th Century.

Commenting on the award Barry and Jane say “It’s a privilege to receive such an award and recognition from CAMRA for all our hard work.” Barry, a former Michael Caine impersonator, continued “Earlier this year we were nominated for a national Greene King Excellence Award”. Unfortunately the presentation evening had to be cancelled due to COVID-19. This latest award and recognition from local drinkers makes up for some of that disappointment.”

Presenting the award, Chris Bailey, local CAMRA Branch Chairman added “The village local forms the cornerstone of many communities, evidenced no more so than during the recent lockdown when so many publicans stepped up to the plate to support the vulnerable in their communities. As our Branch longest serving publicans Barry and Jane’s unprecedented commitment to Beyton and the wider community is testimony to this and emphasises how important it is to Protect your local Pub. I would urge those who value these community assets to join CAMRA and help save them from closure.”

The final thoughts from Barry and Jane, when asked to recall the most memorable events of their long career were two fold; firstly was the ‘smoking ban’ which hit the licensed trade hard – “We had to reinvent ourselves to stay in business” and, secondly, “The kindness and compassion of customers, locals, and friends from across the licenced trade following the unexpected loss of our daughter, Sarah, a victim of the Swine Flu epidemic, in January 2011.”